Probably the most famous of tribes, the maasai. Recognisable from their beautiful red costumes and shoes from tires. A must-see visit for travelers (they’re hard to miss). Maasai are a indigenous ethnic group inhabiting northern, central and southern Kenya and northern Tanzania and do originally reside near the many game parks of the African Great Lakes. They live here together with many other Tanzanian tribes.

Apart from their looks and whereabouts, the Maasai are known for their highly-skilled warriors and their cattle-herding abilities. In fact, in Maasai culture, a man’s wealth is measured in terms of cattle and children. A herd of 50 cattle is a respectable amount, and the more children, the better. O and they drink blood!

The language of the Maasai is Maa, a language derived from Nilo-Saharan, related to Dinka and Nuer. These days many Maasai also speak the official languages of Kenya and Tanzania, Swahili and English.

Maasai also have traditional beliefs, the Maasai god (Enkai or Engai) was manifested in two forms: the black god, who was benevolent; and the red god, who was vengeful. Today most of the Maasai tribe are Christians and a minority are Muslims. 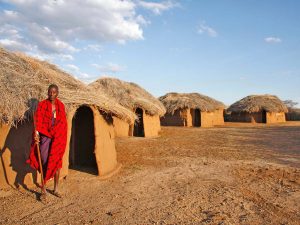 The traditional Maasai village is called a ‘Manyatta’ and consists of a number of small cow dung made houses with thatched roofs. The Inkajijik, which is the name of their houses, are usually circular or loaf-shaped. The houses are made by the village woman and they are made of mud, sticks, grass, cow dung and cow’s urine. Women are also responsible for the supplying of water, collecting firewood, milking cattle and cooking for the family.

The Inkajijik stand quite close to each other, all surrounded by a circular Enkang (fence) which means to protect their cattle (and themselves) at night from wild animals. In opposition to the houses, the fence is made the the village men.

They move their herds from one place to another, so that the grass has a chance to grow again; traditionally, this is made possible by a communal land tenure system in which everyone in an area shares access to water and pasture. Nowadays Maasai have increasingly been forced to settle, and many take jobs in towns.

Originally, the keeping of Livestock such as cows, goats and sheep is the primary source of income for the Maasai. Livestock serves as a social utility and plays an important role in the Maasai economy. Livestock is traded for other livestock, cash or livestock products such as milk and siege. 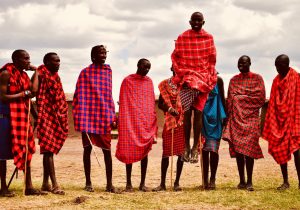 The maasai are famous for their jumping skills. From tradition the men learn how to jump high, the higher their jumping is , the more status the male gains, also for the woman. The jumping comes forth from the Maasai adamu, or jumping dance. Under the sound of a traditional beat, the jumping is a celebration to mark the ride of passage and to welcome young men to the next stage of their lives.

Most Maasai usually wear the color red because it symbolizes their culture and they believe it scares away lions. Even though red is favored, black, blue and stripes are worn too. The name of the dress their men wear is a Shúkà, which is a red robe. The women wear clothes that are colorful and decorated with beads. Their warriors wear their hair in red-dyed braids.

One aspect of traditional Maasai culture is the passage from boyhood to manhood. The most important role of becoming a man, is circumcision. After the traditional circumcision, the boys wear a black ‘Shuka’ (this was a robe, remember? We’re learning ‘Maa’ here) white face paint and brass coils. The brass coils of metal hanging on the boys chest belongs to his mother. His headdress has the carcasses of birds which he, according to tradition, has shot with a bow and arrow. This costume will be worn  during their initiation and healing period. This process will take 3-4 months, and the boys must remain in black cloths for a period of 4-8 months. After they are healed, they have become a new person and receive the status of a new warrior.

There’s two kinds of Maasai markets here in Tanzania. One for buying all your souvenirs and gifts (basically the tourist version of the Maasai market) and the real Maasai market. This is the local market where local Maasai come to trade their livestock and goods. These markets are less common for ‘tourists’ to visit. The real local markets are usually found outside of the town, unlike the touristic Maasai markets. It’s best to go together with a guide or local friend who can help you with haggling for prices for your Maasai trinkets or that goat that you just want to buy as your new pet. You can also bring your own bargaining skills if you think you can handle it. The Maasai Market is usually open between 8am and 6pm and can be found at several locations around town.

And for the ones that don’t have a strong stomach, maybe don’t buy local market food. As you might, probably will end up with diarrhea. If you’re close to your sleeping destination for the night, give it a try on your own risk, but if you still have that 3 hour car ride on your schedule it’s best to just leave it there.