Located just a short drive from Arusha Town, lies the national park with that bears the same name. Arusha National Park is the most accessible national park of the Northern Circuit in Tanzania and the perfect place for a day trip or as the first ór last stop on a longer itinerary. At just 552 square kilometres, Arusha NP is a small park with a lot to see.

Arusha National park is divided between three districts: Momella Lakes, Mount Meru & the Ngurdoto Crater. Depending on the time of year you can spot thousands of flamingo’s at Momella Lakes, who migrate between Lake Manyara and here.

Within these districts, Arusha NP boasts a broad variety of landscapes, ranging from open savannah through acacia scrubland to rainforest and, eventually, to alpine conditions on the higher reaches of Mt. Meru.

With diverse wildlife that includes herbivores such as elephants, hippos, buffalo, zebra, and even the occasional wildebeest, Arusha National Park is also a perfect place to get out and stretch your legs – with both walking safaris and canoe safaris available within the park.

The National Park is also home to the world’s largest population of giraffes, making it a great place to visit for fans of these long-necked, beautiful animals.

Arusha National Park is the closest park to the town with the similar name. It is a popular destination for day trip visitors who are about to embark from the town of Arusha on longer northern circuit safaris.

Arusha National Park is an interesting park to look at both for safari enthousiasts and climbers, as it lies at the foot of Mt Kilimanjaro’s little brother, Mt Meru.

Since its so close to the city predators are rarely spotted. Lions have moved elsewhere and leopards can easily hide in the bushes. However, there’s loads of factors that make Arusha NP a worthy opponent for your ‘top 5 national parks bucket list’.

Due to the absence of predatory animals, such as lions, Arusha National Park lends itself perfectly for an exciting walking safari with a ranger.

Walking freely alongside the wildlife of Tanzania offers a truly unique experience. Here you´ll be walking at the foot of Mt. Meru, surrounded by green forests, lakes, waterfalls and a huge population of giraffes. A walking safari offers an amazing chance to be up-close with wildlife. The Colobus monkey is one of the highlights you can spot in Arusha NP and can often be found swinging from the trees.

Mount Meru is an active, but dorment volcano and forms the center of Arusha National Park. It is known for its huge cliffs and green surroundings at the foot.

Mt. Meru is the second highest mountain in Tanzania. It might not be as tall as its big brother, but it requires more technical skills of its climber, making it a real challenge. The mountain isn’t climbed as often and gives you a really unique, more private experience. It can be climbed in a 3 day route or a 4 day route. 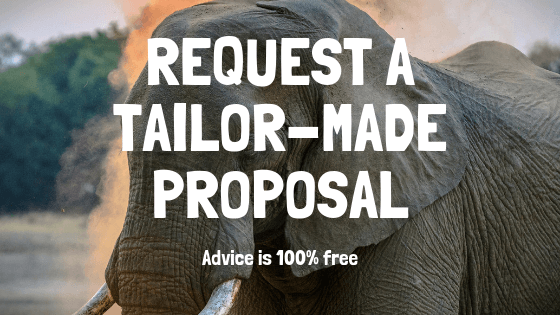 2. Call with us about your adventure

3. You and your trip-expert will co-create your perfect trip!

The best time to visit Arusha National Park greatly depends on your personal preferences. The time  of your visit can greatly affect your wildlife experience. The park is a known to be a great place to spot birds, which generally is the best time between November to December and March through May. This is when the migratory birds such as the flamingos arrive.

However, if you prefer to spot mammals, the best time to visit would be in the dry season, between June and October. This is the dryest period of the year, making them significantly easier to spot in the normally thick, lush forests. Since water is more scarce, there’s a great chance to spot wildlife near one of the fresh water sources.

The dry months, including January and February, is also the best period to take on Mt. Meru.

A short list of the ‘most wanted’ animals in Arusha National Park and the chances of spotting them. Some animals are (almost) unique to each park or only appear in certain areas. It’s important to let us know your wildlife preferences, so we can give you the best chance of spotting your favorite animal.

The numbers listed are an estimation of how often we’ve seen these animals ourselves based on our visits. Some animals we’ve seen 100%, everytime we’ve visited. However, it’s not a zoo, so there’s always a chance you miss an animal.

Arusha National Park usually has a pleasant and mild climate with fresh mornings and evenings, but nice and warm temperatures during the day. Due to the national park being at the foot of Mt Meru, the climate is highly influenced by the mountain resulting in unpredictable weather and higher chances of rain near the slopes than at the surrounding areas.

The temperature differences can be quite drastic. It’s highly adviced to bring a thick sweather for early morning safaris as the average temperature is around 10 degrees at night time. Day-time termpatures are usually around 20 degrees, depending on the time of year and elevation level.

Arusha National Park offers more than ‘just’ wildlife spotting. There’s quite a few amazing activities you can underdate if you’re on your way to the park.

For more info check out the activities on the right

Arusha National Park: Where to Stay?

Below are some of our favorite accommodations in/near Arusha National Park. Most people choose to stay outside of the national park as there are loads of options available in multiple price ranges, from budget to luxury. The cost of staying inside of the park is significantly more expensive, but if you can spare some money, there are a few amazing options available within the national park itself!

Of course there’s also the option of camping, which isn’t mentioned in the accommodations listed down below. We select our accommodations on a few criteria that guarantee the best possible experience. Some of these criteria are most scenic views, unique (efficient) and adventurous locations and of course the wildlife-experience!

View all of our accommodations (including many more unlisted)

Note that you’re only allowed to drive in the parks between 6am and 6pm.

Gather some inspiration for your visit to Tanzania. Explore the possibilities and let us co-create your perfect safari.

Other National Parks of Tanzania

Discover some of the country's most renowned wildlife reserves