Hang ten with the Maasai Tribe – Life in a Maasai village

When you book with an account, you will be able to track your payment status, track the confirmation and you can also rate the tour after you finished the tour.
Sign Up
2364
Full- or Half day
Availability : On Request
Arusha / Moshi
HighlightsActivity ScheduleIncluded/Excluded

Pictures of the Maasai village visit

About the Maasai village visit

Visiting a Maasai village is a great way to learn about the culture of the Maasai. Probably the most famous of tribes, who still lives their lives like our grand-grand-grand-grand-fathers. Recognisable from their beautiful red costumes and shoes from tires. A must-see visit for travelers (they’re hard to miss). Maasai are a indigenous ethnic group inhabiting northern, central and southern Kenya and northern Tanzania and do originally reside near the many game parks of the African Great Lakes.

Visiting a Maasai tribe village: what to expect

In the morning you will be picked up from your residency by one of our English speaking guides and transferred to a Maasai village of your choice. The guide will lead you around the village tell you everything about the culture and people of the Maasai.

Of course you need to live among the local people to get the full feeling of how a typical day in a Maasai village looks like. That is why you can join different daily activities of the Maasai tribe, for example milking cows or goats, collecting wood, using ancient weapons, building houses or making a typical lunch.

After living a day in their village, you will have learned a lot about how life used to be several hundred of years ago and have experienced their culture first-hand. Which is the best way to learn.

Different Maasai Villages: Usually we will pick one of two different places where you can visit the Maasai. Under certain circumstances we can decide to visit another village.

More about the Maasai:

A Maasai village consists of several houses made of mud and cow-dung, surrounded by fencing to protect their cattle from lions & other predators. Apart from their looks and whereabouts, the Maasai are known for their highly-skilled warriors and their cattle-herding abilities. In fact, in Maasai culture, a man’s wealth is measured in terms of cattle and children. A herd of 50 cattle is a respectable amount, and the more children, the better. O and they drink blood!

They’re pretty cool guys, and you can hang out with them. Let them show you how to dance and jump. Really experience their lifestyle, be invited to their Maasai village homes, help them milk their cows and the real badasses can even join a session of blood drinking.. or at least watch it. If you’re interested in learning some more facts about the Maasai, or you just want to brag about your maasai knowledge, check out this link.

*Note: This tour is both available as a full day tour, where you truly experience the daily life of the Maasai. It is also available as a shorter excursion, for example after a safari. Different prices apply in this case (enquire).

Info about the Maasai village visit 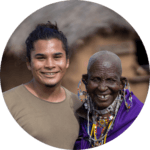 Let us plan your Tanzania adventure!

Ask us for a quote or enquire about your tailor-made travel proposal. We'll be in touch within 24 hours.
Let's start planning!
Or Whatsapp us

Discover some of our pre-assembled safaris...
View our safaris